Sometimes in life you’re given the opportunity to be in a room with an individual who draws you in with magnetic charisma. That chance to be near someone who burns passionately and bright, with brightly burning passion. That rare occasion to witness a giant carafe burst through a wall, scream “OH YEAH,” and offer you a taste of their sweet red Kool-Aid. These are Intense Individuals. And then there are the times when you pack an entire bar with Intense Individuals, give them a stage and Jell-O shots, and watch them congregate into a swirling solar system of gleaming intensity that leaves your head spinning, wondering the next day whether you actually saw two polygamist Mormons praying for the souls of Jersey Shore while Susan Boyle crooned Les Miserables behind them. You did, my friend, because you were at the 6th Annual Intense Individual Party.

If you follow this blog, then you know that every year the Intense Individuals project culminates in the “II” costume party for charity, where everybody dresses as an Intense Individual (although some are sufficiently intense to come as themselves – don’t assume, you’ll be notified if you qualify…). 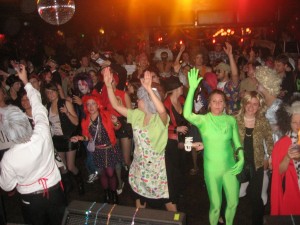 This past year the Beatles showed up and played real tunes with real instruments and real fake Liverpool accents. Ladies dressed as fans brought Beatle Mania and almost drowned them out with schoolgirl screams until Yoko came on-stage and broke up the band amidst boos. Dressed as Richard Simmons, I channeled his effeminate energy and danced all night, although the next morning my body regretted the break-dancing.

The effort that went into people’s costumes put mine to shame, though, and Outside the Booth studio has photos to prove it. Everyone had a prop – Crocodile Hunter brought an alligator (crocodile?), Paula Deen a face ham, Dwight Schrute a beet, Octomom her babies, Peg Bundy a camel toe. Someone even dressed as Lisa’s favorite prop, Ardy the rubber duck. The costumes were first-rate as well: Mona Lisa waxed her eyebrows, Bjork made her swan dress, Mystique was painted a deep blue, Green Man was, well, green, and Little Edie looked so great she later won a Golden Globe. And here I didn’t even Bedazzle a single rhinestone on my Richard Simmons tank top.

Axl and Slash came as strangers but, upon meeting, exchanged greetings normally reserved for bitter rivals who, goddammit, still respect the hell out of each other.

Glambert lip-synched a set, and then all musicians including no less than three Gagas joined onstage for “We Are The World”. The only original WATW singer present was Cyndi Lauper but she was distracted by Elvis’s gyrating and missed her solo.

It was Colonel Sanders that stole the show, though, gathering enough votes in exchange for chicken that he took home first place. Second place was a scary-accurate and disturbingly beautiful Boy George, and third went to the Mormons for staying in character all night and creeping everybody out. The real winners, though, were the kids. No, seriously, proceeds went to 826LA, which tutors kids in writing and stuff.

Category The PartyPosted on Dec 06

Next year The Intense Individual Party will be on January 29, 2010....I think it's important to note that January 29 is also National Puzzle Day, National Corn Chip Day, Bubble Wrap Appreciation Day, …
END_OF_DOCUMENT_TOKEN_TO_BE_REPLACED
Category The PartyPosted on Jan 14Oct 06

The Intense Individual Party #7 – The Recap!

Count Von Count counted all the votes.... Each of the winners blew us away with their Intensity. Judice from SNL ate pizza with her tiny hands, partied on stage with Zohan as he blew bubbles on h…
END_OF_DOCUMENT_TOKEN_TO_BE_REPLACED