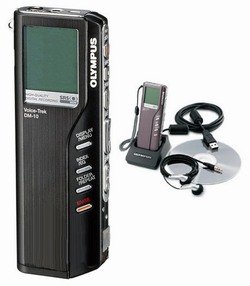 I got a phone call the other day.

John: “Lisa, It’s John. When are you coming home?” (It was about 6pm. And yes by John, it was John my landlord. And by home I mean he lives in the shed behind the four homes on the lot that he owns.)

Lisa: “Um, I will be home in 30 minutes, why?” (He never calls me like this. I was starting to get nervous I didn’t pay him rent for last month or something.)

John: “Just come back to the shed when you get home. I got something for you. Your birthday present is ready.”

UMMMMMMMM.
It was a dictophone. I knew it already. You see, when John was over the other day fixing something in the backyard, talking into his dictophone and making massive notes to add to his TDL

(To Do List), I casually made a comment about how I’d like to get one of those. (I was only half serious…not as serious as Maureen Cullinan was when she met John when she was in town ready to dress up as Mother Teresa for The Intense Individual Party

this past November. It was as if her whole world changed when she saw him clip the dictophone off his belt loop and record a thing to add to the TDL. As she watched John ramble on and on into the d’phone, Maureen shot me a look that screamed “I NEED ONE OF THOSE.”) 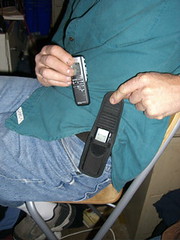 But John took my wish seriously, made a note of it, and followed through. A week later I am the proud owner of my very own dictophone. I probably won’t be going as far John has in regards to my dictophone usage by having “the lady from across the street come over every night and transcribe the notes from the day” but I do plan on making use of it as need be. When John started to explain all the tricks the dictophone could do, I reached into my purse, grabbed my notepad and said, “Hold on

let me write these instructions down.” John just looked at me and smiled, “Lisa, you will never have to say those words again.”

My brother Brian made a funny short about Quintuplets that are reunited after 25 years. Very Intense. :) My friend Deirdre Wall plays the newscaster. Check it out!See more funny videos at Funny or Di…
END_OF_DOCUMENT_TOKEN_TO_BE_REPLACED
Category JudgingPosted on Mar 04Dec 08

I often wonder...at what point does it occur to the "mover" that no more can fit? I am dumbfounded when I see this on the road. Stack-o-holics. These individuals just stack, stack, stack until…
END_OF_DOCUMENT_TOKEN_TO_BE_REPLACED
Category Misc.Posted on Sep 02May 18