Don’t worry, he has already signed a verbal contract to come to the next Intense Individual Party as himself. 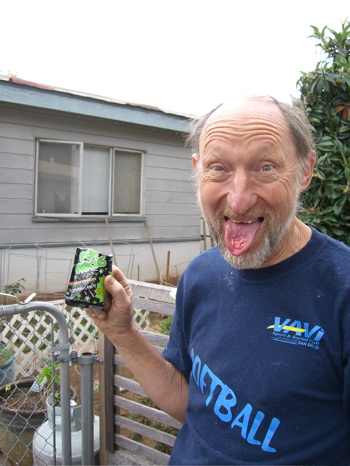 A quick description of John:
– He has a To Do list that consists of 3,547 of things to do.
– It took him 10 years to write the To Do list.
– He says if he added up all the time he spends organizing his To Do list every week it would equal about 2 whole days.
– That’s the last package of Pop Rocks he will ever eat.

You see, if the story of John was a 7 course meal, the little bit of info above would be the bread and butter on the table.

Sometime in the next 361 days, I plan on sitting down with John, borrowing his dictophone he wears on his belt, and interviewing him. He keeps telling me he wants me to make him a star by doing a documentary on his life. Alrighty then John, I hope you are ready for your close-up.

In other Intense news, I guess it’s safe to report that another one bites the dust. 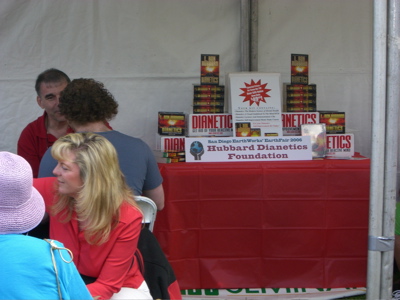 As I was walking through Balboa Park on Sunday through the maze of tents in honor of Earth Day (yes, it was in-tents)…I saw the Scientology booth.

I watched the man with curly hair in the picture above stroll up to the tent and gaze into the eyes of the next Marshall Applewhite. Within seconds he was sitting on the chair facing “Marshall” and nodding in agreement.

Unfortunately, this was not the first time L. Ron Hubbard and Co. made their presence known in San Diego…back in ’89 they found out when the City of San Diego was going to redo the cement in Ocean Beach and pulled a fast one on the wet cement. 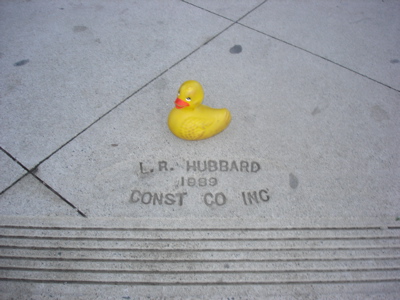 (Sidenote: If the year had read 1994 instead of 1989 it would have solidified everything I have ever thought of in my life.)

Hopefully, it will all make sense after that.

Oh and just to let you know…across from the Scientology tent was Nothing. 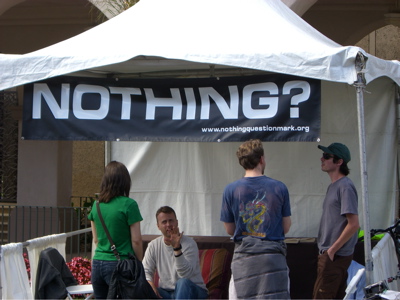 If you have been a part of this movement supporting Nothing please let me know. If it’s Nothing important then don’t worry about telling me about it. But if it’s really Something then I’d like to know. (Unless it involves purple blankets and brand new Nike sneakers.)

Life Outside The Tub

When I read this headline, "FIRM HAS HIGH HOPES: MARS COLONY BY 2025," in the paper Saturday morning I almost put the paper back in the bag, back outside on my doorstep, and crawled back into my bed t…
END_OF_DOCUMENT_TOKEN_TO_BE_REPLACED
Category Misc.Posted on Jun 10

Courtney is one of the biggest fans of Tony Little ever so for her bday I got her a Tony Little signed autograph picture. Here is a picture of the 8x10 headshot, signed personally by T Lit himself.AW…
END_OF_DOCUMENT_TOKEN_TO_BE_REPLACED
Category Misc.Posted on Sep 14

I was at the grocery store with Nicole the other day and saw this Soap Opera Magazine cover. Right when we saw it we burst into hysterics. The look on Jason's face is just priceless. A subtle look …
END_OF_DOCUMENT_TOKEN_TO_BE_REPLACED
Category Misc.Posted on Apr 05

About a year ago I found out about a very disturbing website called www.celinedreams.com ...a forum where fans of Celine Dion are able to write in to let the other members know what kind of dreams the…
END_OF_DOCUMENT_TOKEN_TO_BE_REPLACED