As I was walking back to court after lunch last week I stopped to get a Diet Coke at the little market next to the courthouse. After paying for the Diet Coke I looked down and saw this display. 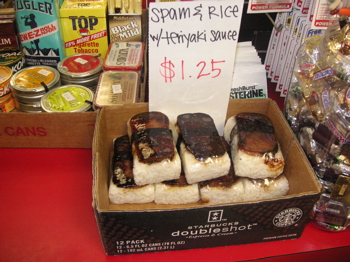 Yes, you read it right. SPAM & RICE W/ TERIYAKI SAUCE…wrapped in seaweed and sealed up with Saran Wrap. Mmmmmm….gag me now.

This did not settle well in my stomach for a couple of reasons.

1) It was SPAM & RICE W/ TERIYAKI SAUCE.
2) It was the most disgusting meal at room temp I had ever seen.
3) I had just eaten terrible cheap sushi myself.

Lesson to be learned about To Go sushi… Just because someone makes the sushi in front of you, doesn’t mean it’s fresh, k?

When I took the picture of this Spam Disaster the woman behind the counter looked at me with a quizzical expression on her face as if to say, “Why-are-you-taking-a-picture-of-my-spam-disaster?”

BTW: Since last Tuesday I have been on a jury for a criminal case. I became an American Citizen and the first thing “they” did to me was get me acquainted with the law. Hello Section 148, nice to meet you.

While it was an interesting experience I am very glad it’s over. Overall the trial was a 6.4/10 on the drama scale. I was waiting for a “DID YOU ORDER THE CODE RED” moment but it didn’t happen. 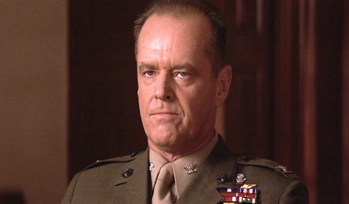 I give it a 6.4 because there were a few highlights. My favorite was when this dude walked in with this loud red suit. I swear it looked exactly like this. 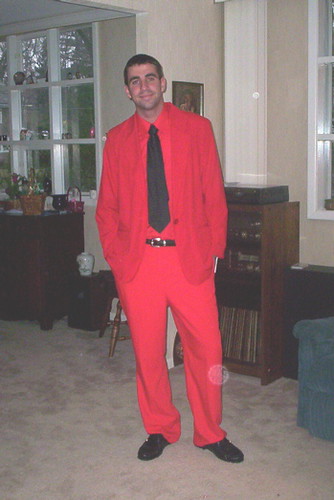 He just sat on the defense’s side for almost half of the day on Friday. It was such a distraction and so tough on me not to laugh that I had to actually turn my seat at one point so I didn’t catch a glimpse of him out of the corner of my eye.

When we spoke with the lawyers after the verdict was read today we were allowed to ask them any questions about the trial that we wanted. One of the first questions that someone asked was: “What was up with the guy in the red suit?”

The defense attorney turned about the shade of that guy’s suit and sort of skipped over that question. I am convinced it was her boyfriend or her boss.

Everyday we had to go through security and for some reason I kept forgetting to take my hole punch out of my purse. I really have no idea why it was in there in the first place but it caused havoc in the courthouse. It would send off alarms and the security guards would then send it through the X-ray a second time. The first time the Female Security Guard (I’ll call her FSG) searched my purse, she pulled out the hole punch in dismay. She held it up and said, “Not allowed! You must not bring this back in here.”

I made a mental/metal note to take it out.

And the post-it didn’t stick.

The next day I casually walked in and placed my purse on the conveyor belt. As I was walking through the metal detector, that mental note popped into my mind. Damn. I forgot to take it out again. I watched them do the second inspection after the Male Security Guard (MSG) manning the machine yelled, “METAL!!” After the second X-ray the MSG handed my purse to the FSG. She opened up my purse, pulled out the hole punch and said: “I told you THIS is not allowed…next time you try and bring it in here we will discard it or you won’t be able to enter.”

I told her I promised to get rid of it.

The next day, again, I completely forgot to take it out. All the FSG did this time after she pulled it out of my purse was stare at it in contempt. After I apologized profusely, she repeated her ultimatum while shaking the hole punch at me. “Next time…”

The weekend passed and today I arrived with a new purse entirely. The FSG recognized me as I entered and just locked eyes with me. As I put my purse on the conveyor belt she gave me a “look.” I just smiled as I watched the purse glide through and then said to her, “Don’t worry. No hole punch.” This made her really happy. 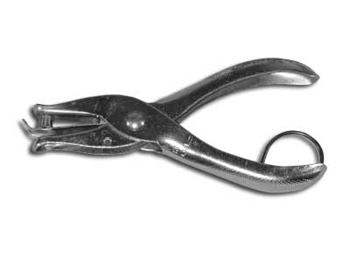 The most bizarre thing about the hole punch security fiasco was that the scissors that were also in my purse were never mentioned…not once.

Sure bring your Swiss Army knives and scissors; just don’t even THINK about bringing a hole punch.

Here is a snapshot I took of some young chap buying a pack of cigarettes at the train station in Stockholm, Sweden. I am not sure if he got the memo but unlike 1985, today we have little tiny Ipods a…
END_OF_DOCUMENT_TOKEN_TO_BE_REPLACED
Category Misc.Posted on Jul 25

What Does It Stand For?

I once got my car fixed by a man named H. I asked him what it stood for....but all I got was, "Just H." So I decided to look into the name H and I found out he is not the only H out there.This is H. …
END_OF_DOCUMENT_TOKEN_TO_BE_REPLACED
Category Misc.Posted on Aug 16

Today's word on dictionary.com was -- TATTOO. Hold on let me go write that down so I don't forget what that means. Are they serious???? (FYI: I will admit that I corrected my spelling error -- thank …
END_OF_DOCUMENT_TOKEN_TO_BE_REPLACED
Category Misc.Posted on Jun 20