I was at the grocery store with Nicole the other day and saw this Soap Opera Magazine cover. Right when we saw it we burst into hysterics. The look on Jason’s face is just priceless. A subtle look of mortal terror as he contemplates his impending death. 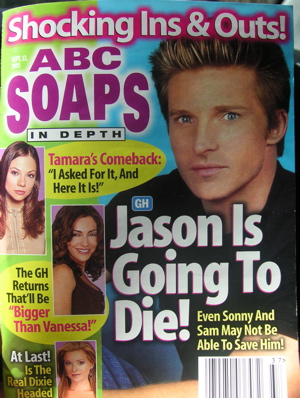 A couple days later I was back in the store and saw it again. The bag boy recognized me as I stood there laughing at it. He walked over to me and said, “Are you the same person who was laughing at this from the other day?” I nodded sheepishly and he just kind of gave me the look of “I-don’t-get-it-but-I’ll-try-and-pretend-to.”

As I gazed at the cover I knew right then that I didn’t have the willpower to turn and walk away. I had to buy it. I scrounged up $3.50 in change (because when I pay all in change it doesn’t really feel as expensive) and clutched the coins in my hand. WHAT A RIP-OFF THIS WAS! This magazine was more than any of the other Guilty Pleasure Celebrity Magazines and it was half the size (about the size of Reader’s Digest and the thickness of Parade).

This was a waste of money but I couldn’t turn back now, my willpower was shot to hell. The cashier motioned me forward, picked up the booklet to scan it and then had a moment with it.

With a sympathetic look she stared at the cover and said, “I can’t believe he’s going to die. Everyone knows it. Chloe, Bart, Chelsea…they all know.” The woman shook her head and reluctantly handed the magazine to the bag boy. I mean yeah I loved 90210 back in the day but there is a point when you realize it’s not reality. I personally cannot stand Soap Operas but maybe I am missing something because the way that woman spoke about Jason’s death it was like she was talking about her own son.

Feeling real awkward for buying the magazine at this point, I quickly handed her the coins, told her I was “Sorry about Jason” and went on my way.

As I got in the car I thought to myself, isn’t “Jason Is Going To Die” just a nice way of saying “We at General Hospital hate your acting, you’re fired, you suck?”

Tough on him that his acting ability is splashed all over the press.

If you are reading this and are an avid fan of General Hospital, please divulge the juice…WHAT IS UP WITH JASON AND HOW SERIOUS IS IT? (Obviously I chose not to read the article…I got my $3.50 worth of entertainment from the picture alone.)

No Longer A Resident Alien

1) It lies. 2) Only 17% of people actually eat it on the trail. I bought the Whole Foods Brand, More Than Macadamia (wow, that just got added to the tough words to spell list) Trail Mix the othe…
END_OF_DOCUMENT_TOKEN_TO_BE_REPLACED
Category Misc.Posted on Jun 11

The Culprit confessed last night via text message at 11:13pm.I can now rest peacefully.Here is a picture of her I took in March of 2005. Here are some things about her if you're bad at puzzles* and c…
END_OF_DOCUMENT_TOKEN_TO_BE_REPLACED
Category Misc.Posted on Oct 22

Hey elves need to clean up, too! …
END_OF_DOCUMENT_TOKEN_TO_BE_REPLACED