So I just found out that we have a month called February! It falls sweetly in between Jan and March (the former being a popular unisex name made even more popular by Eve Plumb…the latter not used as a name). That makes me think…why do we not use February, March, September, October, November, and December as first names? Why do January (yes they are out there), April, May, June, July (they are out there, too) and August get to have all the fun? I’ll tell you right now why we don’t give the others a chance to be first names….because it would confuse people. For example: March can never be a name, K? I repeat — it can never be a name. Maybe I am offending some individuals but I will not apologize. March must be left to define the action of parading aroud…in uniform or not. Whatever. I don’t care. Although it is way cooler to march in uniform (formation and outfit). 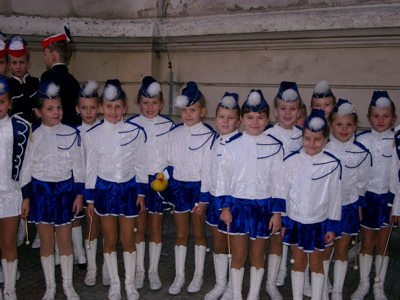 Although I have never worn a marching band uniform…I’ve played the trombone(age: 11), the xylophone(age: 4 1/2), and watched my friend Erin play the french horn (good for her). It’s strange but every time I think of playing the trombone I think of 101 Dalmatians. I’ll never forget the feeling I got when I saw that movie for the very first time. SO MANY DOGS! It was almost as life changing as experiencing Bed(k)nobs and Broomsticks for the first time…seeing that bed fly away like Elliot and ET. Ahhhhh before the days of Murder She Wrote. Those were the days.

But as I was saying, every year Feb (so much easier to spell than adding the awkward “RUARY”) slips right by and I find myself marching into the third month of the year wondering where the hell the past 28/29LY days just went. This Friday night I plan on leaping into March with a vengeance. Bring it on March: YOU WILL NOT TAKE CONTROL OF ME LIKE FEB DID! Just cause it’s the shortest month of the year doesn’t mean it should go by faster…or does it? Chew on that. It’s so WEIRD! Seriously, there’s so many varieties! Greg and I were in Palm Springs the other day for 24 hours of mayhem which I will go into in another post dedicated to the Intense Individuals we encountered when we were out there. Anyway, on Saturday night we stopped at Ralph’s to get some snacks for our hotel room and while walking through the fruit aisle…we ran into the exotic section (sans pole).
Each piece is like it’s very own Cracker Jack box…you never know what surprise you will find inside. (It was very very hard to not quote Forrest’s mom here.) Cheramoya is the green one with the white and brown seeds inside. I bring this one up in particular because Ralph’s lied…said it was a mango turned strawberry turned peach turned pear…not true. Try tree bark turned tree bark. If you’ve tried one of these and have an argument why I should give this little guy a second chance let me know. I mean, they are obviously hot right now, they dominate the Farmer’s Markets…right behind the overrated Blood Oranges.

(Insert Hugh Grant’s voice here) “Oh those bloody oranges”…I’ve tried to like them but anything with the word Blood in it is a true turn off for me. Plus the initials are BO. So it’s really got it tough. Almost as tough as someone with the name September would have it. Anyway, I don’t mean to player hate on the “Chera”…maybe it was not ripe, maybe Ralph’s gave it too much hype, or ….hmmm am I rhyming? I think I might be….WOW…this….might be going somewhere. POE!

Category Misc.Posted on Dec 08May 18

Instead of candy on the outside these apples got the candy on the inside. What what!? …
END_OF_DOCUMENT_TOKEN_TO_BE_REPLACED