Over the past month Saskia and I have started to educate one another on dog breeds.

Because dogs are everywhere and it’s important to be aware of your surroundings*. (More on this later) Sometimes when I hangout with Individuals With Intense Dog Knowledge (I.W.I.D.K) I wonder…how do they know so much? I then start to question myself on my lack of dog breed knowledge. I mean, I know the Golden Retriever pretty well (at least I thought I did)…. it’s a staple, right? But I didn’t have thorough enough knowledge on the random breeds. 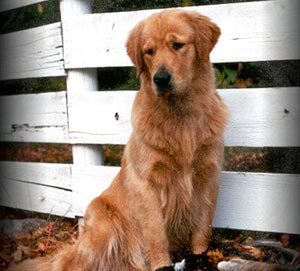 To legally reside in America you have to be able to recognize a GR. I know this because the other day I actually made the mistake of asking a GRDO (Golden Retriever Dog Owner) the most cliché question in doggy world.

I was leaving the dog park with my roommate’s dog Lacey, (after having some quality convos with some dog owners – more on this later) and I saw this odd looking gold color dog and was intrigued. I strolled up to the owner of the gold colored dog and kindly asked “What kind of dog is he?” (I swear – this gold colored dog did not look like a your standard GR. OK, maybe a little bit but not much.) Note to all: Supposedly it’s an unwritten rule to ever ask a GRDO what kind of dog it is even if it looks nothing like a GR.

The man glared at me and replied point blank, “he’s a Golden Retriever!” The man stiffened his upper lip as if I had just asked him what color the ocean is. He lost it. So in an effort to defend myself from him taking his dog’s leash and strangling me I said, “Oh really? He just looks different that’s all.” This sent him off the edge. “Why does he look different?” he barked at me. Flabbergasted by his Intensity over the matter I quickly mumbled, “Um- well- he-just-looks-different-than-most- Golden-Retrievers-I’ve-come-across—In-a-good-way.” Then I grabbed Lacey and sprinted off.

It’s not like I have something against GRDOs (My family used to be one back in ’86) and a few of my close friends are GRDOs…I just want to warn everyone out there that if you think a dog is GR…it probably is. If you aren’t sure…don’t ask. It’s just not worth it.

Another staple is the Cocker Spaniel (shout out to Lady who died in 1998.) Lady was a good dog 64% of the time until we took her to a kennel when we took a vacation to Canada back in ’94…and she changed. One word: backpacks. She went freakin’ ballistic over backpacks. If one of my siblings left out a backpack with heaven forbid a left over sandwich from lunch in it….she would guard it, growl, and sometimes even go to bite you. This never happened before she went to the kennel. Although food in general got weird for her post-kennel experience, it was the backpack that made her un-lady like.

Anyway, the reason I am writing about this new found dog awareness that Saskia and I have been challenging ourselves with is because this morning it literally almost came back to bite me in the ass.

Like I mentioned earlier, when I was at the dog park I had a few deep convos with fellow dog park dwellers about their dogs. We talked about the recent kidney failure scare with the contaminated dog food as well as Cesar Millan, Cesar Millan, Cesar Millan, and well, Cesar Millan. It is truly unbelievable how many Dog Owners are obsessed with Cesar Millan, The Dog Whispererrrrrrrrrrrrrr. They all “swear by” him and think he’s the best thing since Canine Caviar. One woman went so far as to say, “You know he’s is actually quite sexy…because he is so…in control you know.” Right. I wonder what kind of relationships she finds herself in. 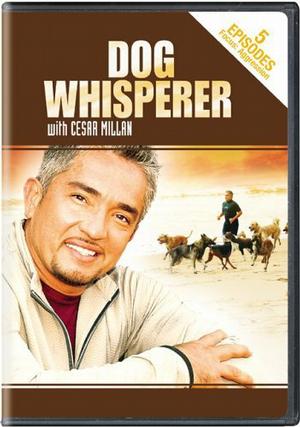 One of the ladies I was talking to about the kidney scare was an owner of a “German Short-Haired Pointer.” An interesting breed. (Saskia we need to talk) Supposedly this breed is secretly fast as hell, works with horses, and beats greyhounds in most races. (I am suspect on this one. I mean I sensed a bit of favoritism.) 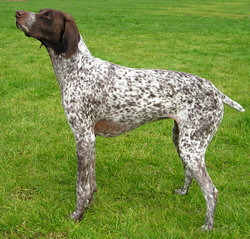 Suddenly, I looked down at the dog and stared at him for a moment. GULP….it wasn’t a GSHP. Something was different about him. Something was off. Very off.

You see, Lacey is a very very friendly dog to all other dogs but at this moment I saw something going on in doggy language that was far from basic pleasantries. I heard the dog growl and at that moment the dog owner answered my question. “Well, he’s got a bit of German short-hair in him but this one is also part Pit Bull”. AND….. BAM. The dog leaped up and went to attack me. Holy Crap. I yanked Lacey away, fearing for both of our lives, and I hovered on to the neighbor’s grass. The lady pulled the Pit Bull back, continued down the street and shouted out to me, “Sorry! He’s kind of crazy sometimes!” 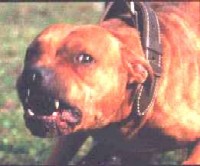 UM! YEAH! Point very much taken.
Case in point: Always be aware of your surroundings.

PS – Through our findings…I have to thank Saskia for enlightening me on the Neopolitan Mastiff the Most Intriguing Dog so far for me in the quest for more dog knowledge. 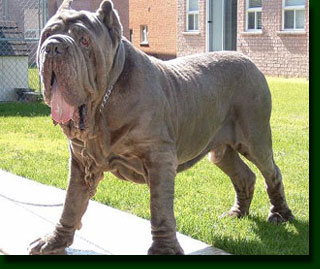 And if I do say so myself, I believe Saskia would NOT thank me for introducing her to the Chinese Crested Dog. There really are no words. Only nightmares. 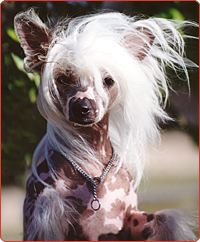 Too bad Cesar wasn’t around back in ’94, I would have had him whisper sweet nothings to Lady hoovering over the backpacks.

Courtney is one of the biggest fans of Tony Little ever so for her bday I got her a Tony Little signed autograph picture. Here is a picture of the 8x10 headshot, signed personally by T Lit himself.AW…
END_OF_DOCUMENT_TOKEN_TO_BE_REPLACED
Category Misc.Posted on Sep 05

Oh Say Can You Seeeeee….

So I have my swearing in ceremony on Wednesday to become an American Citizen. There have been numerous interviews, fingerprinting, tests, and oral exams since I began the process but I will not go in…
END_OF_DOCUMENT_TOKEN_TO_BE_REPLACED
Category Misc.Posted on Jan 04

If you can get past the craziness of Party City you can get yourself a Twitter Piñata. Although it may be more fun for those who hate Twitter...it's still a must have for any celebration in January.…
END_OF_DOCUMENT_TOKEN_TO_BE_REPLACED