While the Oscars may get longer and longer every year, I still get more and more excited for them every year. What can I say…I love the Oscars and especially all the intense moments that happen. Like when Roberto Benigni went nuts. The most intense moment in Oscar history. (And yes I considered Sasheen Littlefeather’s acceptance speech for Marlon Brando and Robert Opel streaking in 1974.) 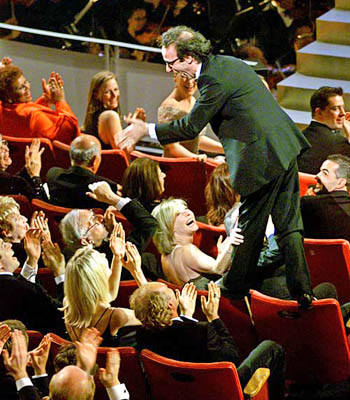 Before I get on with the prop bets, I have to say that this year I have one MAJOR issue with the nominees. Hailee Steinfeld who plays Mattie Ross in True Grit should be nominated for Best Actress… NOT supporting. That’s like giving Tom Hanks a best supporting actor nod for his work in Cast Away. (OK OK…maybe not exactly on that same scale but seriously…she starts the movie, ends the movie, and is in basically EVERY scene of the movie.) I am not saying she would win the best actress category, I just feel she was seriously overlooked…Jeff Bridges Hailee is the lead in the film.

Here are some ideas for prop bets for the 83rd Academy Awards. Get yo’ dolla dolla bills out! 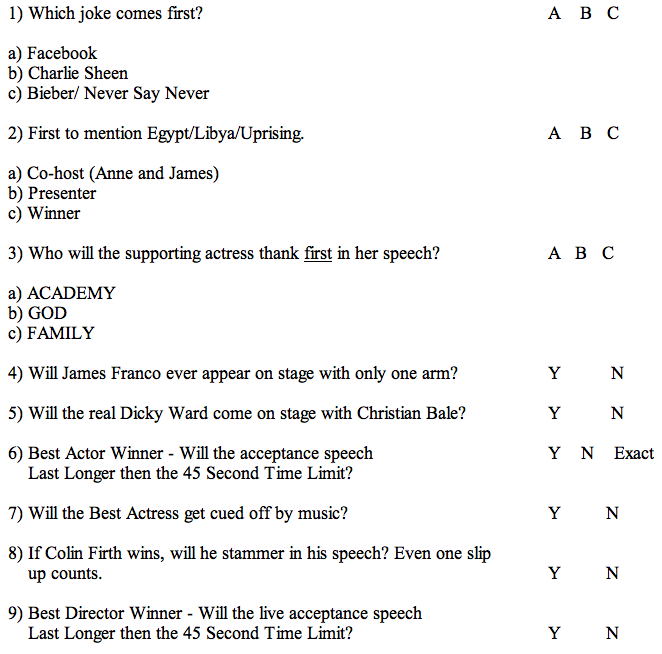 My favorite quote from this year leading up to the awards: Banksy, on his nomination for Best Documentary Exit Through The Gift Shop, “The last time there was a naked man covered in gold paint in my house, it was me.”

Yes, Banksy tagged himself on the side of a building in Los Angeles as a gold statue. If he doesn’t win I wonder if that space will be back to black tomorrow?

The Grammys: Eggs, Muppets and BYOGP