When we were kids we didn’t have a choice. We used the toothpaste our parents bought us that tasted like wanna be bubble gum and we were forced to brush our teeth. Brushing your teeth was the worst. But then at some point in life it dawns on you that you can’t imagine NOT brushing your teeth twice a day. The age that this happens is still a mystery but it’s probably around the teenage years. At that point I started to choose my own toothpaste because I was cool like that. I tried Close-Up thinking  it would speed along the “first kiss” only to find out that Close-Up sucks. I remember spending too much time and probably wasting half a tube of toothpaste trying to make it look like it did in the commercials…

It never happened. It was impossible to flip the paste to have that perfect curl. I had mastered it with my 80’s bangs but couldn’t do it on the toothbrush. This was around the time I started realizing that commercials promised one thing while actually delivering another. I mean, the commercial SAID every guy I walked by would want to kiss me but instead all that I got was a mouth full of  bright red paste that had Red40 written all over it and breath full of cinnamon. Maybe I should have focused on taming my tricked out bangs instead of my teeth. Soon after that debacle I moved on and found a new relationship with Crest. It became my toothpaste of choice for many years with a couple of cheating spells with Colgate mixed in there as well. I used Tom’s for awhile…I actually really enjoyed Tom but Crest was always the paste that I went back to.

So flashforward. I am now 30 and share a tube of paste with my fiancé Greg. About a week ago we started running out of toothpaste.  We were squeezing every last drop out of the tube in some lame attempt to defeat the tube and keep finding more. Finally there was no more. It was time to get more toothpaste. I was going to pick some up yesterday on my way home but I forgot. So when I was talking to Greg on the phone as he was driving home from work, I asked him if he could go to the store to get more toothpaste. Thirty minutes later he comes walking through the door with a grocery bag. He pulls out the toothpaste and it was….ARM & HAMMER! WTF! We already have baking soda in the fridge we didn’t need it in the bathroom, too! 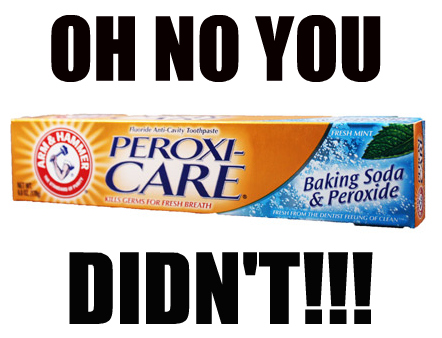 I asked him why he decided to switch it up out of the blue… He must have seen a commercial. Nope! He just felt like something new! He told me it had peroxide just like Crest and that I should be open minded to it. So I did. I gave it a shot last night and the minute I put my toothbrush in my mouth I knew it. It was the worst…and he agreed. I’d rather take a swig of liquid Amoxicillin any day. (Not that Amoxicillin is a replacement for mouth wash it’s just that I believe it’s one of the sickest tastes known to mankind and never understood why they made kids suffer with that taste when they had ear infections.) So it’s back to a new tube…one that we wouldn’t BAKE with.