Yesterday I was walking by a trash can at the exact same time a Parking Meter Dude’s car (smaller than the size of a SMART car) pulled up. At the exact same moment he stopped, I threw away some trash in the trash can. I continued walking for a couple feet and then BAM. Explosion. The Parking Dude stayed in his car. Everyone stopped and looked around. As the Parking Dude finally emerged…he yelled out that he thought the trash can had a bomb in it…then looked at me as I was the last to throw anything in there. Smoke filled the area. Drama was about to unfold. I threw my hands up, “It wasn’t me!” I didn’t know if I should run or continue expressing my innocence. I decided to err on the side of innocence and not run which would suddenly turn me into a criminal. As the Parking Dude surveyed the scene, he called for back-up…the real police. I hid behind a wall nearby to watch what was happening which probably made me more suspect but I needed to know! Did the explosion come from within the trash can or…was it his mini parking car? Both were still in tact so it was a REAL LIFE MYSTERY. 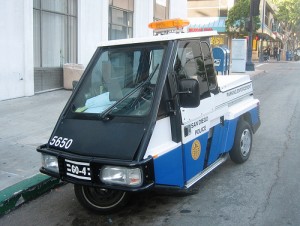 As the cops showed up, it became more and more obvious that this was not the trash can or my doing…it was the Parking Dude’s mini parking car. I have no clue in hell how a mini car like that could cause such a loud sound and also remain intact. The culprit? The mini car’s mini battery. There is no explanation as to how a mini battery in a mini car could make such a non-mini noise.